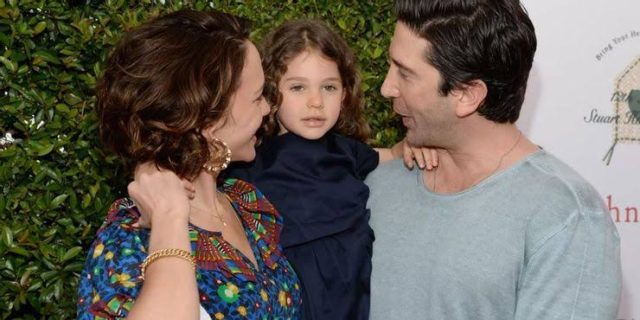 One of the most iconic shows in television history is the show Friends. Friends was a beautiful sitcom that followed a group of friends living in New York City. As they try to figure out what their life should be like. Even though Friends ended over ten years ago in 2004. His show still makes people laugh and smile to this day. Since the show ending, many of the main cast members have settled down and started a family. We have gathered ten pictures of the cast of Friends. With their kids so you know what your favorite castmembers stars are up to now.

Lisa Kudrow and her husband, advertising executive Michel Stern, welcomed a baby boy, Julian Stern, into this world in 1998. Since she was pregnant with her son during the family of Friends, the writers wrote her pregnancy into the show. Now much older. Julian is seen here with his mom as they get ready to attend an event with both of them having a smile on their face. Seeing Kudrow attending an event with her son makes us realize how much of a cool Mom she is. It’s crazy to see how Kudrow’s son has grown up. Since we watched him as Kudrow carried him in the show.

Matt LeBlanc is the father of a beautiful girl, Marina LeBlanc. That he had with his now ex-wife, model Melissa McKnight. This photo beautifully captures LeBlenc’s love for his daughter in just one shot. First LeBlanc is leading his daughter through the crowd of paparazzi. While walking LeBlanc is holding onto his daughter’s backpack with one hand, and with his other hand. He is holding Marina’s hand to help her through the crowd. We love seeing LeBlanc brake away from his iconic funny character, Joey, to protect his only daughter from the paparazzi.

David Schwimmer knows how to make people laugh. So when he and his now separated wife, artist Zoë Buckman. Had a little girl, Cleo Schwimmer, in 2011 we can only guess that Cleo is always laughing. In this adorable family photo, you can see Cleo and her parents making silly faces for the camera. Cleo who is in-between her parents is sticking out her tongue as she holds her mouth open with her fingers. This is sure to be a picture that Cleo looks back at and loves several years from now.

Lisa Kudrow is seen here attending a Disney Channel High School Musical event with her whole family when her son, Julian Stern, was smaller. Seen between his parents Julian is smiling for the camera as his mom Kudrow puts her hand on his shoulder. And we would be smiling too if we were able to attend a High School Musical event with our parents. Though this event is definitely for Julian, both of is parents are smiling and just happy to be able to spend some time with the family.

Many people say that there is not a stronger force in the world than how much a mother loves their child. In this photo, Courtney Cox is with her daughter, Coco Arquette, as they attend an event together. This shot shows Coco closely embracing her Mother, Cox, as they pose for the picture, Coco leaning into her mom and wrapping her arm around her. Cox is embracing Coco too as she has one of her hands around Coco’s waist. The mother/daughter duo is also wearing the same blue shirt to make them match even more!

One of the greatest pictures a parent can take with their little one is a family photo, and the stars are just like us when it comes to taking those kinds of shots. Matt LeBlanc is seen here in a family shot that shows now ex-wife, Melissa McKnight, and their adorable little girl Marina. This photo of Marina is when she is not even 2 months old and is one of the rare shots that LeBlanc shared of his family. You can tell by the smiles on Marina’s parents face how tied they are to be raising a little one. But even though they are tired they still love their little girl.

Three Is Never A Crowd

When David Schwimmer and his now separated wife, Zoë Buckman, decided to bring their daughter, Cleo, to a Hollywood event, you better believe that there were photos taken of the whole family. This picture is absolutely perfect to see how much Cleo’s parents love her. Here you can see both Schwimmer and Buckman holding their daughter up as they both look at her with a loving smile. Though Cleo seems camera-shy in the picture you can tell how much her parents comfort her by having her hands on both of her parents.

At any family event, there is going to be a lot of pictures that are going to be taken. In this shot, you can see Courtney Cox with her now ex-husband, David Arquette, and their daughter Coco. As the family is all squished together to get into the picture, you can see Cox holding Coco, as Coco looks off to the side. Coco does not care to have her picture taken at this moment and has her hands up to her mouth to cover her face. But even then Coco still looks adorable in her white dress.

At can be said that Lisa Kudrow is trying to be a great Mom. In this photo of her and her son, Julian, you can see that they are on the red carpet for a Tony Hawk skateboarding game event. Julian is beaming with a smile as he takes photos with his Mom before heading into the event. You can see that Julian, who looks like he just came from his soccer practice, is so beyond excited that he gets to go to this video game event with his mother, Kudrow!