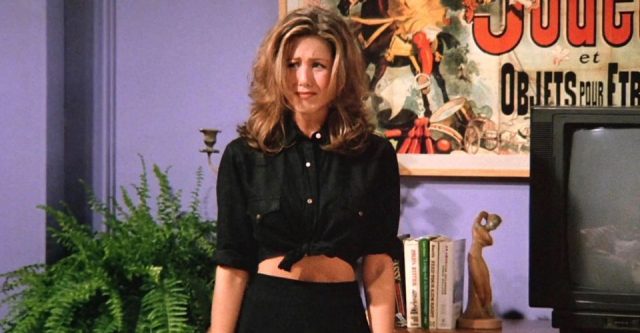 Jennifer Aniston revealed in an interview with James Corden. She said she still wears clothing and shoes she took from the set of Friends. Aniston was revered for her fashion sense throughout the decade she co-starred on the NBC sitcom. Where the character of Rachel blended trendy late 90s items with classic pieces. Friends fashion reached far and wide, past the clothing through to the hairstyle Aniston sported, affectionately called “The Rachel” by people who coveted the long shag as their own.

Aniston played Rachel for ten years alongside castmates Lisa Kudrow (Phoebe), Courteney Cox (Monica). David Schwimmer (Ross), Matt LeBlanc (Joey), and Matthew Perry (Chandler). Friends became the darling of NBC’s Must-See Thursday night lineup of shows and pushed the cast into the upper echelons of fame and fortune in the television industry. Friends took its final bow on May 6, 2004, when an estimated 51.1 million people tuned in to see the lights go out in  for the final time.

The cast joined James Corden for “Carpool Karaoke” after they hitched a ride on a golf cart with the late-night host on the Warner Bros. studio backlot while they filmed the Friends reunion special for HBO Max. After singing the series theme song “I’ll Be There for You,” the group retreated to the sound stage where they took the “Best Friends Test” and found out that of all the cast members, Aniston took the most items from the set. The actress admitted that she even still wears the shoes and outfits she stole to this day! Aniston also revealed that it wasn’t just Rachel’s wardrobe rack she stole from, she even took items from Monica’s. “I still wear them,” she admitted. “I would go into Monica’s area — she always had the cutest dresses — and I would steal her [clothes as well].”

The “Best Friends Test” also revealed that the member of their cast that broke character and laughed the most was Kudrow. “I’m the worst. I have no training, no discipline,” she admitted. However, LeBlanc believed that the honor was split between Kudrow and Aniston. He said whenever Rachel Covered her face with both of her hands. It was to hide the fact that Jennifer was laughing.

Friends fashion continues to this day, as the trends of the late 90s and early 2000s have made their return to department store racks. Aniston’s contribution to the look of the decade during Friends aired cannot be denied. Admiration for the casual yet chic looks she sported continues to influence viewers to this day, who covet the stylish fashion which lives forever in reruns.