The cast shared many laughs on the show, breaking characters many times, but did you notice anything that was a complete Friends Fails and should have been more obvious to you? So no one told you life was gonna be this way, but here are all the recent Friends fails fans have just discovered.

The One With The Lamp


In this scene where Emily calls Ross for the first time after he said Rachel’s name at the altar, David Schwimmer improvises. While talking on the phone, he got so into character that he handed Chandler (Matthew Perry) the first thing he could find, which was the lamp on the table. That was not in the script, and he wasn’t supposed to do that so Perry’s reaction is real, but it caused a laugh from the audience and a memorable  Friends Fails scene.

The One Where They Switched Monica


In this Friends Fails scene you see Phoebe and Monica talking at Central Perk, but when it pans to just Phoebe, there is another girl in Monica’s place that isn’t Courteney Cox. It happens so fast you wouldn’t even notice the body double unless you were really looking. Then the camera switches over again, and Cox is back in her place. This realization has just come to light and is one of the most recent findings in the many inconsistencies.

The One Where The Apartment Number Changes 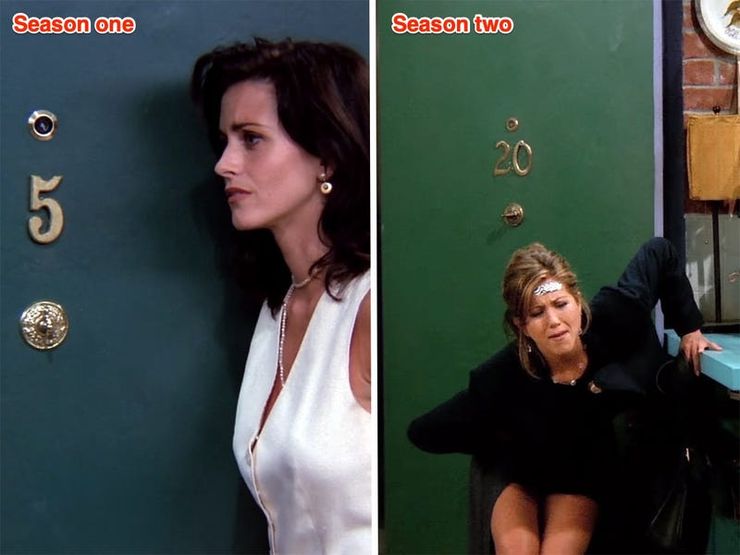 In season one, Monica and Rachel’s apartment has the number 5 on the door, which never made sense in the first place because they walk up a flight of stairs, and apartment 5 would be on the first floor. But that’s not the only fail. Two seasons later, the number changes from 5 to 20. Chandler and Joey, who live right across the hall, also go from living in number 4 to number 19. Yes, the mistake was made, but why change it when fans already noticed the number?

The One Where That’s Not Rachel


Just like the Monica mishap, Rachel was replaced mid-scene. Blink and you might miss it. In “The One With The Mugging,” Rachel, played by Jennifer Aniston, bursts in and excitedly tells Joey he scored an audition with Leonard Hayes. He goes to the doorway to talk to her about it and over his shoulder is another actress who is not Aniston. She isn’t even wearing the same shirt as her.

The One Where Chandler And Rachel Have Met Before 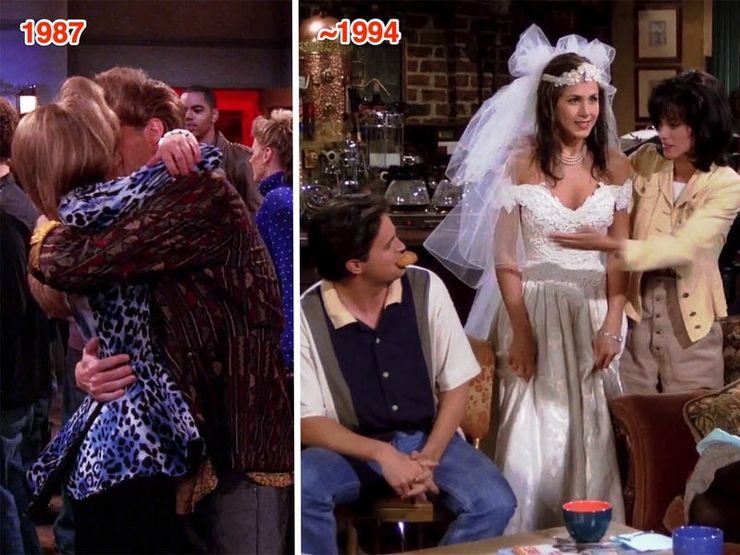 In the pilot episode, we see Rachel run into Central Perk looking for Monica. When she finds her, Monica introduces her to her friends and brother, who she has met before, but it seems as though Rachel has never met Chandler. However, in later episodes when it flashes back to their college days, it is revealed that Chandler and Rachel actually kissed at a party once. And not only that, but they meet in another flashback episode where they are at the Gellar’s for Thanksgiving. Something’s fishy here…

The One Where They Forget About Ben


In the first season, Ross divorces his wife Carol, because it turns out she is a lesbian, but she is also pregnant with his child, Ben. Now, Ben (Cole Sprouse) is seen all throughout the series, but it seems as time goes on, Ross just forgets he has a son. Ben does not appear at Ross and Emily’s wedding and is not in any of the later seasons. He is mentioned in passing, but we never even see him meet his half-sister, Emma or grow up. This is Epic Friends fails scene

The One With The Airport Extras


In “The Last One,” Ross is hurrying to the airport to try and stop Rachel from going to France because he is madly in love with her. Now look closely to the background. When Ross goes up to the desk to buy a ticket you see a couple in the back strolling through the JFK airport. Then when Rachel can’t find her boarding pass and is looking through her bags for it, the extra behind her are the exact same people, except she is at Newark Airport. How did they get there so fast?

The One Where Mike Just Stopped Showing Up

Phoebe is finally happy and gets her happy ending. She finds her Prince Charming in Mike, and they get married in season 10. But after they get married, he is seen in the episode where she wants to change her name, and then for 5 minutes in the first part of the finale. And even then, he just oddly disappears while they are all at Chandler and Monica’s apartment. Yes, he wasn’t a part of the main six, but he was Phoebe’s husband and deserved to be in the final scene. He didn’t appear at the reunion either.

The One Where The Chick And The Duck Just Disappear 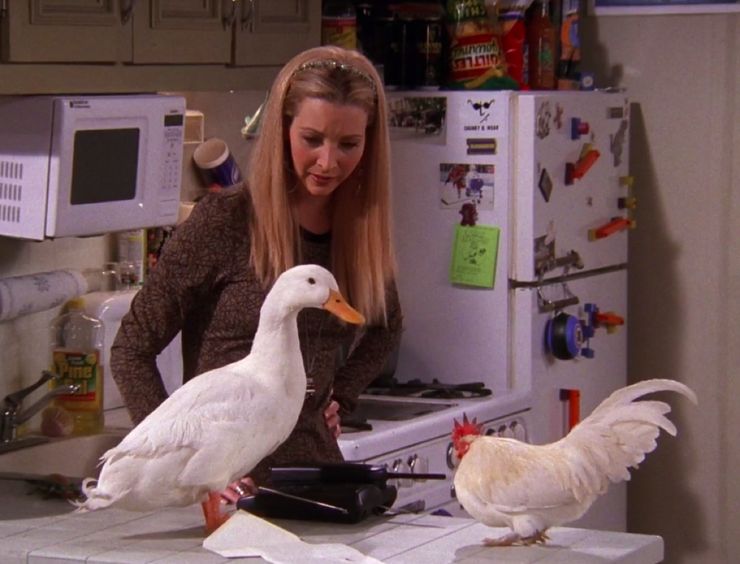 The chick and the duck were crucial parts of the series for a while. They are Chandler and Joey’s beloved pets. However, Rachel and Monica could not stand them. The friends even play a game later. Where they wager apartments or get rid of the chick and the duck. But Joey and Chandler win so the chick and duck stay. But in later seasons, they are just not seen anymore. The logical explanation is that they died. But why wouldn’t that be written in since they were such important parts of the friends’ lives?

The One Where Ross Doesn’t Know His Birthday 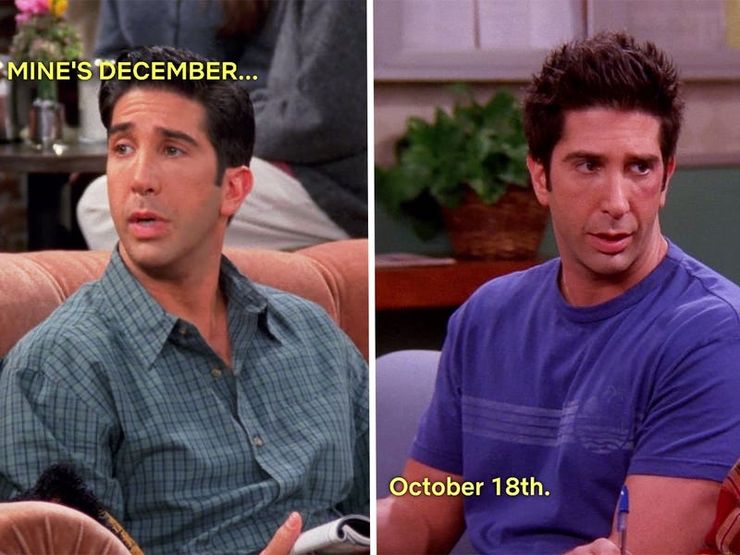 In one episode, Ross is celebrating his birthday in March. Then  Gunther is asking Rachel about her birthday. Ross chimes in that he is in December. But Gunther doesn’t care and cuts him off. But then in “The One Where Emma Cries.” Ross is at the hospital, and when Joey is filling out the forms for him. He tells him it is October 18th. So which day is it really? He also supposedly remains 29 for three whole seasons.

The One Where Rachel Is Pregnant For Longer Than Usual 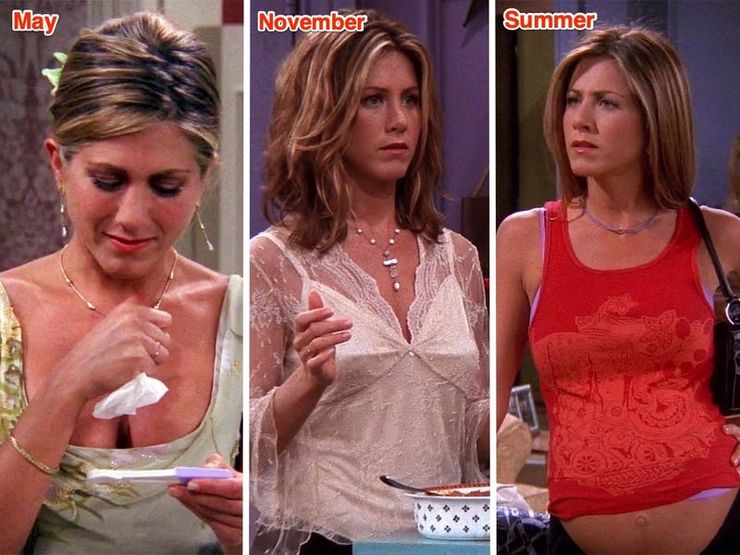 Rachel finds out that she is pregnant at Monica and Chandler’s wedding. Which we know from a previous episode is May 15. Now she would already be about a month pregnant. Because Ross reveals he slept with Rachel. “about a month ago.” She is pregnant for nearly the entirety of season 8. Which is about a year in Friends world. In episode 9 of that season. It is Thanksgiving, and Rachel should be about seven months pregnant. But she isn’t showing at all. Finally, in episode 22, she gives birth. where she tells Ross it is 100 degrees outside. Which indicates it is Summer in New York City. But according to the timeline, she should have given birth in January.