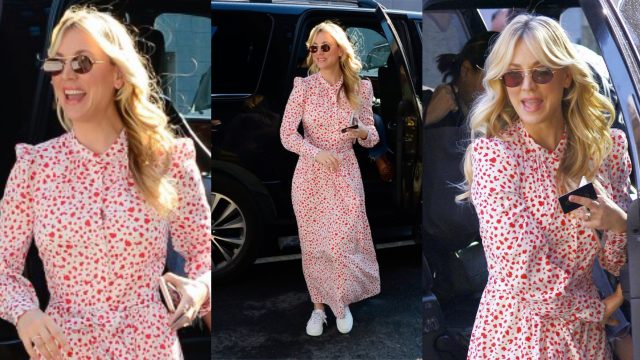 After more than a decade on the small screen. The CBS sitcom aired its final episode on 16 May, and Penny actress Kaley Cuoco looked in high spirits as the curtains were drawn for the last time. The 33-year-old was spotted out and about in New York on Thursday morning, getting ready for an appearance on CBS This Morning.

The star has been playing Penny since 2007 and has already paid tribute to the popular character that she’s leaving behind. Speaking to Entertainment Weekly, she said: ‘I’m going to owe all of my careers to this show. No matter what I do after this.  ‘This is what made us who we are. We were here for 12 years. This is a big part of our career. Kaley failed to hold tears despite the smiles on Thursday as she introduced The Big Bang Theory documentary

Co-star Johnny Galecki shared a clip from the program. She was unraveling The Mystery, which aired after the season finale. It showed the Penny actress getting all choked up as she welcomed fans to the show.  In the short clip, Kaley said: ‘We want to take you behind the scenes, share some secrets as we say goodbye.  Getting emotional, Kaley’s voice started to crack as she continued. To a place that has been our home for a long time. She was joined by the Leonard actor, who has been on set with Kaley Cuoco since day one.