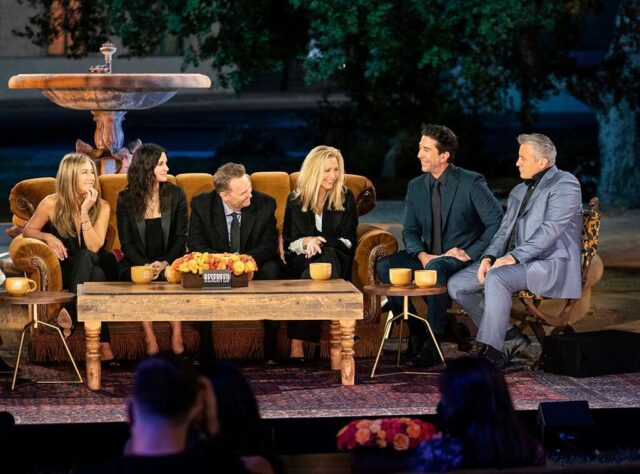 Friends followed the lives of Rachel Green, Monica Geller, Ross Geller, Chandler Bing, Joey Tribbiani and Phoebe Buffay. After 236 episodes, fans had a difficult time saying goodbye to their six favorite friends, but not every episode was a winner. In fact, fans have some harsh words to say about a few episodes.

Ross’s short-lived marriage to Emily was the worst, according to Friends fans

The single least-liked episode of Friends revolved around Ross and Emily. While one might think Ross and Emily’s wedding was the least appealing episode of the entire series, that distinction goes to an episode shortly before the wedding cliffhanger.

The episode has a couple of elements fans didn’t love. Most importantly, it was the first time that fans were made aware of Emily’s discomfort around Rachel, which didn’t sit well with viewers. The episode also included a flashback of all of Ross and Rachel’s best and worst moments as a couple.

Chandler and Joey had the original bromance. The duo was tight from the second the series started, and very little could be done to derail their friendship. Fans hated to see the best friends fight. That is probably why “The One With Mac and C.H.E.E.S.E.,” the twelfth episode of season six, is the second least-liked episode of the entire series.

Chandler, in a rush, forgets to write down the time and date of Joey’s audition, and Joey, rightfully so, freaks out. The entire episode is all about how Chandler let Joey down. The tension was profound, and it was one of the few times that Chandler was a truly bad friend to Joey.

Three episodes of Friends are tied for the third spot

Three episodes during the show’s 10 season run are tied for third place as the worst episodes of the entire show. Fans couldn’t stand  “The One with Christmas in Tulsa,” “The One with Joey’s Interview,” and “The One with the Vows.”

Friends fans seemed to hate episodes that forced a look back at the series, although they seemingly enjoyed flashback episodes that took viewers back to the days before the six pals spent all their time inside Monica’s apartment. “The One With the Vows” is a look back at Chandler and Monica’s relationship. While fans largely adored the couple together, they, apparently, could have lived without a walk down memory lane.

“The One with Christmas in Tulsa” is about Monica and Chandler, too, but in the episode, Chandler quit his job when Monica fears he is going to have an affair. Fans largely disliked the forced drama. Finally, “The One with Joey’s Interview” just didn’t seem to contain enough excitement for fans.