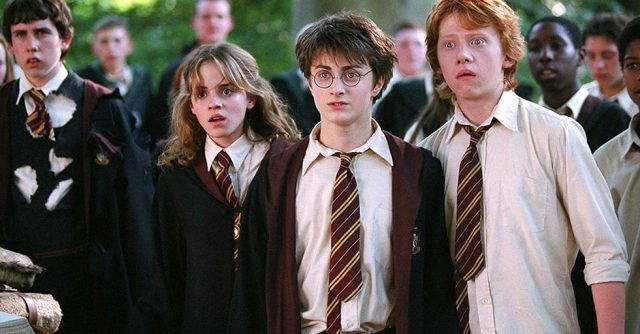 As we all know, at the end of Harry Potter and the Goblet of Fire, Harry is transported into a graveyard via Portkey, where he watches Voldemort

return to his full strength.

Here’s a summary of Miraniel’s theory: Portkeys usually only go one way, but the cup goes two ways. Not only that, but it returns to the front of the maze, not the center where it originally was.

If Barty Crouch Jr. was the one who enchanted the cup and knew that it was going to be used to trap Harry in the graveyard, why allow a return trip at all?

The theory is that a Death Eater — or even Voldemort himself — was going to travel back to Hogwarts using the Portkey after Harry was dead. And join Barty Crouch Jr. as an undercover agent.

How, you ask? Well, with Harry dead. Voldemort has a full head of hair that he can use to make plenty of Polyjuice Potion. So he could return disguised as Harry, the triumphant victor of the Triwizard Tournament.

Miraniel goes even further, suggesting that Voldemort could remain disguised as Harry. Causing the public to think that the Boy Who Lived had turned into a Dark Lord himself.

But — thank goodness — none of that happened. Thanks in large part to Harry’s thick plot armor and his love of Expelliarmus.

Miraniel goes into much more detail in the full theory, which you can read here